Kempston Radiators is Bedfordshire’s leading specialist for vehicle cooling services. Offering offer a full range of cooling and garage services on all types of vehicles including cars, vans and mini buses. 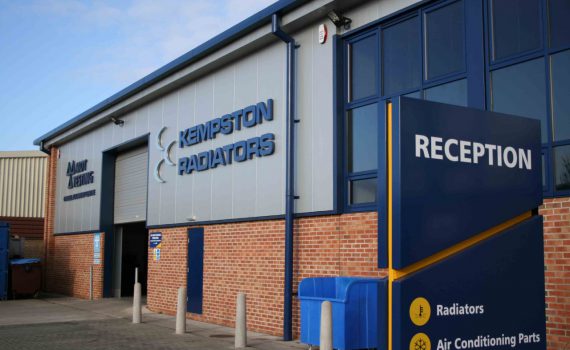 Welcome to Kempston Radiators! Bedfordshire’s leading specialist for vehicle cooling services. Our team of dedicated and highly trained staff can complete a range of cooling and garage services across all types of car, van and minibus.

Kempston Radiators was originally formed just after the First World War by two brothers Elwyn and Guy Davies who had both served time in France (Somme) as army engineers repairing trucks and machinery which included the repair of radiators. Their business was called The Conquest Radiator Company named after the street where their workshop was based.

The company later changed its name to Davies Bros when they moved premises to Kempston Mill in the 1950’s and the brothers continued working up until their retirement. During this period, Roger Shoosmith had been working for Guy and Elwyn after school and at weekends taking care of their garden and working within the radiator workshop. Roger took over the business on the brothers’ retirement in 1973 and changed the name to Kempston Radiator Repairs continuing to trade at The Mill until 1986 when the Kempston Radiators moved to purpose built premises on the Woburn Road Industrial Estate.

Steve Shoosmith originally joined the Kempston Radiators in 1984 aged 16, as a summer job before returning to further education, by the end of the summer however, his decision had changed and Steve became the company’s first employee, a father and son team.

In 1986 the decision was made to drop ‘repairs’ from the company name to become Kempston Radiators, this was due to the fact that up to this point repairs was the only service that was offered, but with the move to larger premises we were able to stock and distribute new radiators as well.

Over the next 9 years Kempston Radiators continued to grow and take on more staff, during this period Andrew had demonstrated an interest in mechanical repairs and in 1997 the directors made an acquisition of a local garage called Gavin Motors based at old Elstow Storage Depot, Andrew went on to take control of the daily running, the name was changed to Gavin Fleetcare and in 1999 the company moved to purpose built premises on the Woburn Road Industrial Estate.

As Kempston Radiators continued to expand it was obvious it had outgrown its premises and in 2010 the decision was made to move to new premises on Woburn Road industrial estate, which is the site we still occupy today, allowing us to offer a much wider range of services with state of the art facilities.

It’s been an interesting journey! but one we are very proud of, and continue to grow and develop the company, and services we can offer.

How to find us

Welcome to Kempston Radiators!  Bedfordshire’s leading specialist for vehicle cooling services. If you require garage or cooling services in Bedford or the surrounding area, Kempston Radiators can offer cutting-edge technology and state of the art facilities for all service, maintenance and repair work. Our team of dedicated and highly trained staff can complete a range of cooling and garage services across all types of car, van and minibus.

We use cookies on our website to give you the most relevant experience by remembering your preferences and repeat visits. By clicking “Accept”, you consent to the use of ALL the cookies.
Cookie settingsACCEPT
Manage consent

This website uses cookies to improve your experience while you navigate through the website. Out of these, the cookies that are categorized as necessary are stored on your browser as they are essential for the working of basic functionalities of the website. We also use third-party cookies that help us analyze and understand how you use this website. These cookies will be stored in your browser only with your consent. You also have the option to opt-out of these cookies. But opting out of some of these cookies may affect your browsing experience.
Necessary Always Enabled
Necessary cookies are absolutely essential for the website to function properly. This category only includes cookies that ensures basic functionalities and security features of the website. These cookies do not store any personal information.
Functional
Functional cookies help to perform certain functionalities like sharing the content of the website on social media platforms, collect feedbacks, and other third-party features.
Performance
Performance cookies are used to understand and analyze the key performance indexes of the website which helps in delivering a better user experience for the visitors.
Analytics
Analytical cookies are used to understand how visitors interact with the website. These cookies help provide information on metrics the number of visitors, bounce rate, traffic source, etc.
Advertisement
Advertisement cookies are used to provide visitors with relevant ads and marketing campaigns. These cookies track visitors across websites and collect information to provide customized ads.
Others
Other uncategorized cookies are those that are being analyzed and have not been classified into a category as yet.
SAVE & ACCEPT
Powered by